Kylie Jenner revealed that she no longer uses lip fillers.

The reality star, whose cosmetically enhanced lips have become part of her signature look over the years, revealed Sunday that she “got rid of all my filler.”

Jenner responded, “I got rid of all my filler” with several wide-eyed and smiley emojis. 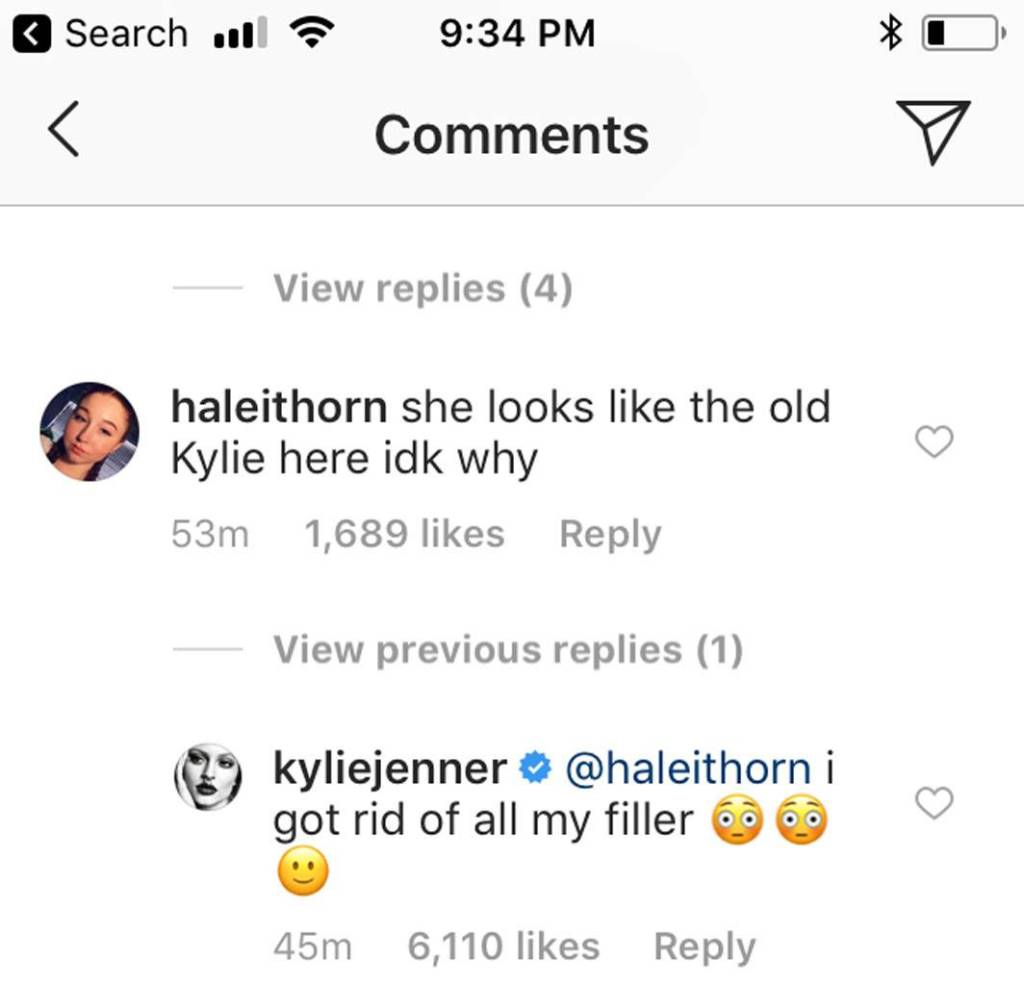 On Friday, the 20-year-old Kylie Cosmetics CEO answered fan questions in a video Q&A, where she revealed that her daughter, Stormi Webster, did not inherit her lips.

“Stormi reminds me, she’s my twin. Now she’s like, looking a lot more like her dad,” Jenner shared. “The one thing I was insecure about, she has — she has the most perfect lips in the whole entire world. She didn’t get those from me.”

Jenner had previously opened up about the cosmetic surgeries she’s undergone to enlarge her lips.

“I have temporary lip fillers, it’s just an insecurity of mine and it’s what I wanted to do,” she said in an episode of Keeping Up With The Kardashians that aired in May 2015. “I want to admit to the lips, but people are so quick to judge me on everything so I might have tiptoed around the truth. But I didn’t lie.”

She later admitted she may have initially gone “too far” when she started the injections.

“When you first get them done, you’re like, ‘Oh, it could be a little bit bigger on that side.’ I’d go back and be like, ‘They went down’ and think they could be bigger. But I went too far. It was very painful,” she told Complex.

Jenner had initially refused to comment on rumours that she had gotten lip fillers. But in 2015 she admitted she had undergone the temporary fix.

Jenner got the temporary lip fillers in 2012 and she decided to talk about the reasoning behind it during an episode of Life of Kylie in 2017.

“I was 15 and I was insecure about my lips,” Jenner said to her therapist on the episode. “I had really small lips, and it was, like, one of my first kisses, and a guy was like, ‘I didn’t think you’d be a good kisser because you have such small lips.”

Jenner went on to say that she “didn’t feel desirable or pretty.”

Many Jenner fans took to Twitter to talk about the reality star getting rid of her lip fillers.

Justin Bieber is engaged and not to Selena

Lesson learned children: all fake things come to an end

This is a PSA to everyone I would like to announce that kylie jenner dissolved her lip fillers so that means that lip fillers are now cancelled until further notice , thank you pic.twitter.com/kqEPIrLE9O

can we appreciate how hotter kylie jenner is without lip fillers!!! pic.twitter.com/5z0bSWC1rl

@KylieJenner claims to have “removed” her lip fillers. That’s gonna be a no from me dog- myth busted pic.twitter.com/OuLu0iG99n