Warning: This story includes content that may be disturbing to some readers. Discretion is advised.

For Jake Hurl, being back in his own home after nearly a month in hospital is a welcome change, but the memory of being trapped and fearing for his life in the Teeple Terrace building collapse in London, Ont., is still very fresh.

The partial collapse occurred just before noon on Dec. 11 at 555 Teeple Terrace., the site of Nest on Wonderland, which was under construction.

Two people died and four others were taken to hospital following the collapse, including Hurl.

“At 11:30 a.m. I remember the guy coming up to me telling me, hey man you should go for lunch early, fifteen minutes before the accident, and I just laughed it off and was trying to be the good employee,” Hurl said.

“I was looking for a pipe, and I just found it … and next thing, I went to turn back around and there was quite a bit of weight on my legs that wasn’t there before.”

Hurl was on the ground floor of the four-storey building, his legs trapped under three floors of rubble.

“My left thigh got the most impact, and basically everything in my left leg or left thigh broke or blew up inside my leg,” he said.

Hurl’s legs acted as a wedge, keeping the concrete in place, creating a difficult situation for first responders trying to free him from the unstable structure.

“If they pulled me out the wrong time or the wrong way, all that stuff down on them,” he said.

Hurl was trapped under the rubble for over four hours, with doctors talking about having to amputate his legs to free him. 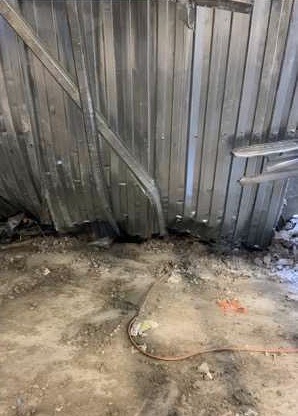 This is where Jacob Hurl was trapped. The small hole in the middle is where his legs were stuck up to the top of his thigh, between the sheet metal (which is the floor that fell from above) and the concrete. The orange piece of plastic on the right is part of the tourniquet used to secure his wounds.

Not knowing if he would live or die, Hurl said he heard his father’s voice in his head telling him to fight.

“I hear my dad in the back of my head saying … ‘come on, stay in it you SOB,’ and that’s what pushed me through it.”

“It was like, I need to make it through this no matter how hard it is.”

What following after being freed was a tough 28 days in the hospital. With a list of injuries just as long, he still has a long road of recovery ahead.

“It was a very scary thing to not know what was going to happen. It went from almost dying, to a surgeon having to come to the site and almost cut my legs off, to being in the hospital for hours on end and not knowing whether I was still going to have my leg.”

Hurl suffered chemical burns all up his right leg and has a skin graft on his left, as well as a broken femur and broken hip.

He also suffered spine damage —  a broken sacrum and vertebrae t3 to t5 have compression fractures — as well as a concussion and a cracked skull, which needed nine stitches.

While in hospital, Hurl endured two fasciotomies where doctors cut his legs open to relieve the pressure from the swelling.

“I had a blood clot in my lung, and that’s still in there, and I have to take blood thinners, but if that blood clot moves to my heart, I’m done,” Hurl said.

“I’ve been having bad dreams, hearing people screaming for help, and mentally it’s been really tough.”

On top of all of his injures he says he has been coughing up debris from the accident, and was told the concrete dust will stay in his lungs forever.

A GoFundMe page has been set up to aid in his recovery.

Still, Hurl is not letting this tragedy, or thoughts of what about what could have been, keep him down.

“I’m going to take this in a positive way because (1) there are things that need to be changed and (2) I need to stay positive because why be negative about it?”

Hurl talked about how great it was to spend Christmas with his family and get to celebrate his 22nd birthday on Jan. 1.

“At one point on Dec. 11 and the following 10 hours after that, there was a point where I wasn’t going to make it to 22 alive and I don’t know a whole lot of 21-year-olds who can say that.”

Now he is sharing his story to advocate for change to make construction sites safer, and so his two coworkers who were killed in the collapse — Henry Harder, 26, of Tillsonburg and John Martens, 21, of Langton — are not forgotten.

“I never would have even thought that it would happen, especially in a place like Canada where we talk about our safety regulations and wanting to protect our workers.”

Hurl is disappointed in what he said is a lack of regulation and safety rules he said only get addressed when people die.

“Why don’t we try to take a proactive role now and sit down and talk, and talk to the victims of these accidents that are still alive?”

The cause of the accident is still not known as the Ministry of Labour continues its investigation into the collapse.

“The Ministry of Labour, Training and Skills Development (MLTSD) has control of part of the scene where the collapse occurred,” the ministry said in a statement.

To date, the MLTSD has issued twenty requirements and three orders related to the collapse.

After the accident, Ontario Labour Minister Monte McNaughton promised to get answers as soon as possible.

“It will be a thorough investigation, but I can commit and promise to those workers and to the entire community of London and southwestern Ontario that we’re going to get them answers,” he said.

–With files from Andrew Graham