A 'major winter storm' is set to hit southern Ontario. Here's a look at what's expected

A “major winter storm” is set to impact southern Ontario beginning on Wednesday and continuing into early Thursday.

Global News meteorologist Anthony Farnell said snow will first begin across southwest Ontario during the morning and spread into the Toronto area by the early afternoon.

“Conditions will quickly deteriorate as the snow intensity increases during the afternoon commute,” Farnell said.

“Snowfall rates could reach 2 or 3 cm per hour and winds will gust over 60 km/h near the Lake Ontario shore, which will create near-zero visibility with blowing snow.”

Initially the snow will be wet which might reduce blowing snow, but colder air will filter in as the day progresses, he said.

“If you can work from home or leave early, Wednesday would be the day to do it,” Farnell said.

It will be the “biggest snowstorm of the winter so far” in the Greater Toronto Area, with up to 25 cm likely by Thursday morning, he added. 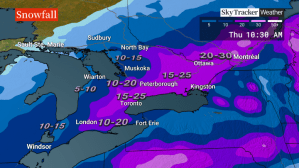 For areas in eastern Ontario and into southern Quebec, from Ottawa to Montreal, 30 cm is possible with snowfall lingering through Thursday.

Environment Canada placed a large portion of southern Ontario and parts of Quebec under a special weather statement ahead of the system. On Tuesday afternoon, most of the weather statements were replaced with snowfall warnings, stretching from Windsor up into southern Quebec.

The Greater Toronto Area and Hamilton are among the areas under the snowfall warning.

Heading into the weekend, another snowstorm is likely on Sunday for southern Ontario.

There will be colder air in place, meaning the snow that falls will be light and fluffy, Farnell said.

That system could bring an additional 10 cm. 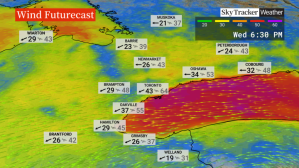 Snow is expected to fall over southern Ontario Wednesday and Thursday! ❄️ Here is a first look at the approximate time of arrival of the system on Wednesday.
View the special weather statement here 👉 https://t.co/VKkSKU3O87#ONstorm #ONwx pic.twitter.com/IzFbyNagqY